Are you voting for the 2022 Northman?

Northman for the 2022 school year elections are happening this month. 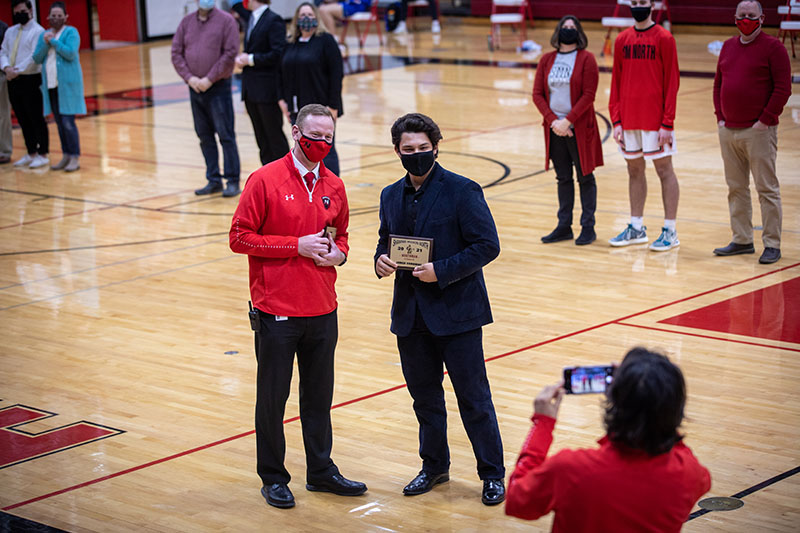 Snapping the shot, Athletic Director Annette Gonzales takes a picture for the school's twitter of senior Jorge Coromac as he stands next to Associate Principal David Ewers. "I was extremely excited and honestly couldn't believe it," Coromac said. "I love the memories the teachers and people you meet at school." photo by racheal cunningham

Seniors will be voting for the top 10 nominees from Friday, Jan. 14 through Jan. 17. Students who are in extracurriculars have voted throughout the past week for their extracurricular nominees. Once all nominees have been chosen by each organization at SM North, the senior class narrows the nominees down to the top 10.

“I currently have 17 nominations and the election for seniors to narrow it down to the top 10 will be this Friday, January 14,” said Student Council Election Head, sophomore Addison Dasilva.

Going back to Mar. 17, 1978, where the first crowning of Shawnee Mission North’s Big Man on Campus took place. This literally meant ‘the biggest man on campus’. At that time, students thought it was a joke and even an insult to be nominated.

“When Jerry Cormack became Student Council sponsor, he decided the title needed to have a more positive reputation,” said Dasilva. “Pep Club and Student Council collaborated, their final result was Northman and it is now seen as a position of honor that demonstrates the seniors’ effect on their peers.”

“The crowning for Northman will be held February 4th, during halftime at the boy’s varsity basketball game,” said Dasilva. “There will be a first runner up, a second runner up, and of course the Northman of Shawnee Mission North for the 2022 school year.”